John Malvin was an influential civic leader who lived in Cleveland from 1831 until his death in 1880. Born in 1795 in Dumfries, Virginia, of a free woman and enslaved father, Malvin apprenticed with his father to learn carpentry and studied reading and writing secretly with a retired slave. In 1827, he moved to Cincinnati where he became an ordained preacher and helped at least five slaves escape to freedom on the Underground Railroad. As he learned that life in the free north was less than perfect, Malvin became an activist against Ohio’s Black Laws. In 1830, Malvin lived with his new wife, Harriet, in her hometown of Louisville, Kentucky, where he was accused of being an escaped slave.

In 1831 John and Harriet moved to Cleveland where he engaged in many occupations including sawmill operator, captain and owner of a canal boat, owner of a lake vessel, carpentry, and occasionally preaching. Throughout his 49 years in Cleveland, Malvin was always involved in civil rights activism, both at the local and national levels. Locally he was instrumental in winning integrated seating in churches, and forming schools for African American children and adults. After purchasing the freedom of his father in law, he helped others in similar ventures.

In 1846 when Cleveland African Americans were invited to join a movement to create a separate black state, Malvin sided with the majority who resolved “the prospects of improvement are brighter here.” He was an advocate against Ohio’s Black Laws until they were repealed in 1849. He was a lecturer for the Ohio state Anti-Slavery Committee and participated in work against Fugitive Slave Laws. During the Civil War, Malvin recruited African Americans for service in the Union, some of whom joined the 55th Massachusetts Infantry Regiment. After the war, he was an advocate for enfranchisement and was active in the Republican Party. 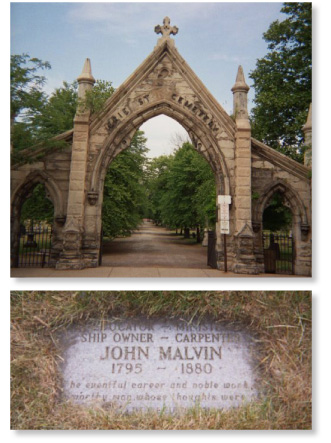 Many of the transformations that occurred during John Malvin’s life were causes for celebration. In 1850 he shared a platform with Fredrick Douglass to commemorate the 16th anniversary of emancipation in the British West Indies. In 1871 he was chairman of a celebration commemorating the 15th amendment. 1n 1876 when Malvin was 81 years old, local citizens held a festival in honor of the emancipation proclamation to benefit “Father Malvin”. The next year his friends gave a testimonial dinner to honor a man who had “labored hard for the elevation of the colored race.” In 1879, John Malvin published his autobiography, North Into Freedom.

John Malvin died on August 1, 1880, and was buried in Erie Street Cemetery. His grave is located north of the large dark monument marked “Barnet.” In the late 1990’s local citizens placed a flat granite marker on his grave. The inscription is taken from his obituary on August 2, 1880, Cleveland Leader: "The eventful career and noble work of a worthy man whose thoughts were of his people, John Malvin, an accomplished educator, ship owner, minister, and carpenter."

In 2003, the Ohio Bicentennial Commission erected an Ohio Historical Marker honoring John Malvin. It is located at the site of John Malvin’s last home in Cleveland. The present-day address is 2320 East 30th Street, which is two blocks south of Carnegie Avenue, the site of Malvin’s last home in Cleveland. (The pre-1906 address was 391 Sterling Street).The marker was placed in 2003. The Marker Number is 58-18. 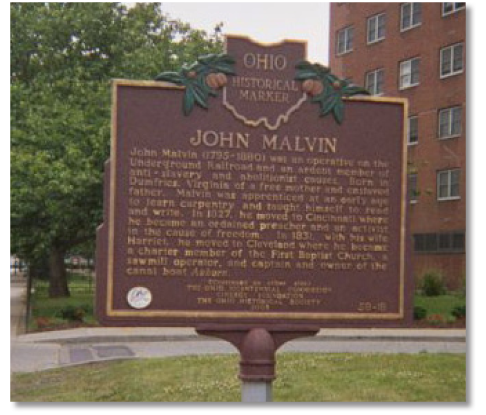 FRONT SIDE:
John Malvin (1795-1880) was an operative on the Underground Railroad and an ardent member of anti-Slavery and abolitionist causes. Born in Dumfries, Virginia of a free mother and enslaved father, Malvin was apprenticed at an early age to learn carpentry and taught himself to read and write. In 1827, he moved to Cincinnati where he became an ordained preacher and an activist in the cause of freedom. In 1831, with his wife Harriet, he moved to Cleveland where he became a charter member of the First Baptist Church, a sawmill operator, and captain and owner of the canal boat Auburn. 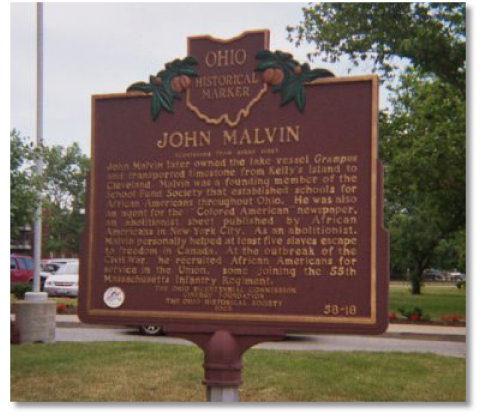 BACK SIDE:
John Malvin later owned the lake vessel Grampus and transported limestone from Kelly’s Island to Cleveland. Malvin was a founding member of the School Fund Society that established schools for African Americans throughout Ohio. He also was an agent for the “Colored American” newspaper, and abolitionist sheet published by African Americans in New York City. As an abolitionist, Malvin personally helped at least 5 slaves escape to freedom in Canada. At the outbreak of the Civil War, he recruited African Americans for service in the Union, some joining the 55th Massachusetts Infantry Regiment.

The primary source for information on Malvin is his forty-two page Autobiography of John Malvin (1879). A modern reprint, North into Freedom: The Autobiography of John Malvin, Free Negro, 1795-1880 (1966), ed. Allan Peskin, is annotated and contains a useful introduction by Peskin. For additional details on Malvin, see Harry E. Davis, "John Malvin, A Western Reserve Pioneer," Journal of Negro History 23 (1938): 426-34, and Kenneth L. Kusmer, A Ghetto Takes Shape: Black Cleveland, 1870-1930 (1976), which places Malvin in the context of the black community of Cleveland.

Your ticket for the: John Malvin, Civic Leader